“You get one shot at lunar orbit rendezvous. If you miss, you could be lost in space forever. ” 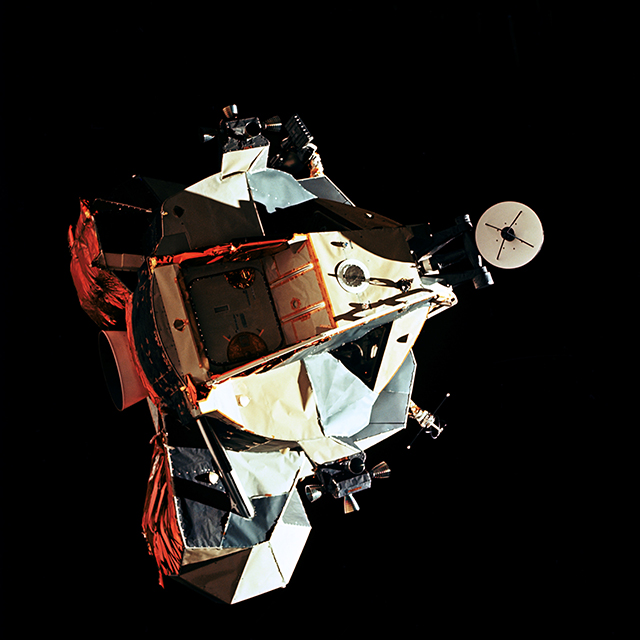 You are now 171 hours into your adventure. You are tethered in your standing position at the LM control station. You are positioned to take-off from the moon. This is where you take off your geologist hat and put back on your test pilot hat.

You are amused at how many people it took to launch you from Earth. On the moon it's easy to press one button to launch yourself into lunar orbit.

Earlier you tested the assent stage rendezvous radar with the Command Module, as the mothership passed overhead. You will now test all four of your assent stage thrusters while still sitting on the lunar surface. After the test you winch when you notice you blew over a communication antenna. You should have planted the antenna further from the vehicle. The good news is all four thrusters checked out, and your assent stage is ready to fly.

You receive “go for lift-off” from mission control. You press the “abort stage” button on the LM control panel. Pressing this button causes the assent and decent stages to separate, using pyrotechnics to sever four bolts that hold the two vehicles together. Explosive charges also drive guillotine blades through the wiring and plumbing that connected the two vehicles. The assent and decent stages are now completely disconnected.

The LMP presses a “proceed” button. The assent stage rocket motor is started and the LM lifts off from the surface of the moon. You hear the rocket motor firing through your space helmet. You realize the rocket combustion chamber is actually located inside the cabin, surrounded in a cylindrical cover that rose up from the assent stage floor. It is only two feet behind you.

The decent stage is now acting as a launch platform for the LM assent stage. It will remain forever on the moon. Bye bye, Lunar Module decent stage.

The assent stage goes straight up for 10 seconds and then pitches over 45 degrees to start gaining horizontal speed. There is no atmosphere on the moon, so the LM can gain horizontal velocity as soon as it lifts off. This fact allows for a very fuel efficient launch profile.

You are now looking straight down on the lunar surface as you quickly gain altitude. The view is just spectacular, but you glance away from the window to watch your instruments on the control panel. You are watching the velocity and altitude readings from the computers and comparing these numbers with charts from Earth. You are looking for any deviation that could indicate a problem.

The truth is you have actually done this rendezvous procedure tens of times in simulators back on Earth. You are absolutely amazed at how the actual numbers are matching the numbers you saw in the simulator. You quietly thank all those people back on Earth who worked so hard to make this voyage possible.

The assent stage rocket motor operates for seven minutes and shuts down. You computers tell you that you are in an elliptical orbit of 47 miles by 9.5 miles, exactly where you want to be. You are closing the distance between the LM assent stage and the CM, which is in a 60 mile circular orbit.

There is still one more short burn of the assent rocket motor necessary to catch the command module. This burn was called Terminal Phase Initiation (TPI). This burn will only last for 2.6 seconds, which is a good thing because you only have 6.5 seconds of fuel remaining. Yea the engineers cut the assent stage fuel margins real tight.

Your new orbit will intersect with the Command module, but because you are heading to a higher orbit, you will pass right on by. So the final maneuver for rendezvous is breaking.

When at a distance of 2 miles, you are in clear sight of the command module, and closing fast. You start to slow your craft down by firing your thrusters. Here is where your piloting skills are necessary. NASA gives you some guidelines about how to do this, but each commander had to use his own judgment. You are thankful for all the practice you had in the simulator. This is your best shot at lunar orbit rendezvous. If you miss, you could be lost in space forever. 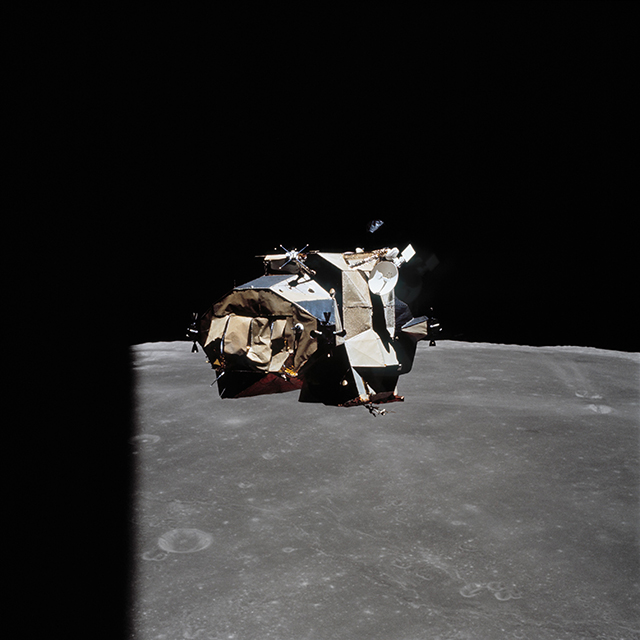 After you successfully match the orbit of the command module you float next to it for a while. This is called station keeping. This operation allowed both vehicles to inspect each other for any damage. The CMP informs you, by radio, the LM looks "beat up" from take off acceleration. You then slowly approach the command module and dock with it, using the docking mechanism.

You unload film magazines, any valuable equipment and your boxes of lunar rocks from the LM to the CM. The CMP complains about how dirty both of you are and you agree. Your space suits are filthy, but there is nothing you can do. You will need you space suites for Earth re-entry. Oh well.

You are exhausted, but relieved at your success. All the remains to be done is to leave lunar orbit and re-enter the Earths atmosphere.

Next: Return to Earth