“The ablative heat shield will heat to 3,000 degrees Celsius, which is as hot as the visible surface of the sun. ” 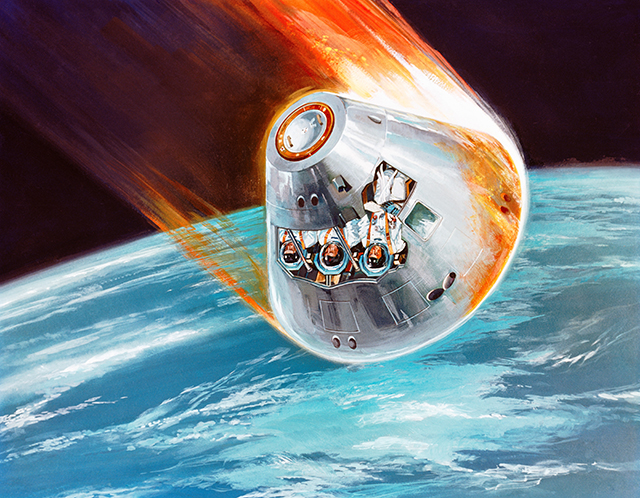 You are now 294 hours into your adventure. Earth looms very large in your command module window. It is growing larger by the minute, because you are now traveling at 24,600 miles per hour. You are about one hour before re-entering the Earths’ atmosphere and there are lots of things to do. Most importantly, you must secure anything loose in the command module cabin. Cameras, rock boxes and other things have to be secured. The g-forces of re-entry could exceed 7 g’s, so anything loose could cause a lot of damage.

The CMP turns the command module around so its blunt heat shield is facing the direction of travel, which is toward the Earth. 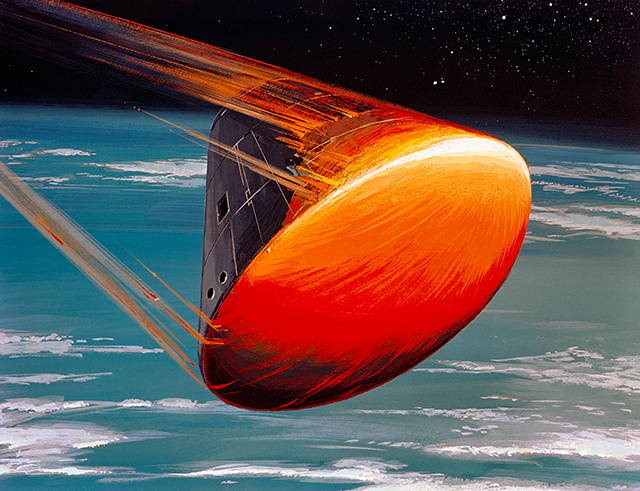 Thirteen minutes before landing, the computer control system detects a deceleration of .05g. You are at about 400,000 feet and this begins the Earth re-entry sequence. You are now traveling at 25,000 miles/hour. In the next thirteen minutes you will travel 1,360 miles across the Earth. The ablative heat shield will heat to 3,000 degrees Celsius, which is as hot as the visible surface of the sun. You and your crew will be subjected to 7.19 g’s at the peak of your deceleration. The temperature inside the command module will only rise by one degree. How remarkable is that?

The crew had little to do but look out the windows. Your spacecraft is under computer control. There is a manual control mode, but you prefer the computer to land the vehicle safely in automatic. Hot plasma envelopes your vehicle as it plows into the atmosphere at high speed. The color out the window starts as a dull red glow, and eventually becomes a white hot glow. The white hot "Air glow" is so intense you can't look directly at it.

NASA scientist determined 7 g's as safe for the astronauts returning from the moon. When you are in the "feet down" position, your craft is plowing deeper into the atmosphere causing the vehicle to rapidly decelerate. The g-forces on the astronauts body increase to 7 g's.

When the computer measures 7 g's, the RCS system would rotate the vehicle 180 degrees and the astronauts would be "feet up". The vehicle would gain altitude, and the g-force would reduce to 4 g's for a time.

All the while the CM computer is calculating and steering a course to your landing site. If it calculates your vehicle is going to miss your destination too long, the RCS system rotates the CM 180 degrees to the "feet down" position. You again plow deeper into the atmosphere and rapidly decelerate. The g-force go to back up to 7 g's.

This cycle of high g-forces and lower g-forces continued many times. You may actually skip back into outer space when you are in the "feet up" position, but your velocity is so low you fall back toward Earth.

Eventually you have lost so much altitude and velocity you are falling straight down. You're within a few miles of the Hawaiian sea. You are truly amazed that this system works so well.

At an altitude of 11 miles the cabin pressure relief valve is set for entry mode. When the air pressure outside the command module is greater the the pressure inside the vehicle, the valve will open and allow some outside air to enter the cabin.

At six miles high the apex cover on top of the command module is jettisoned, and two drogue chutes are deployed that stabilize the craft. Removing the apex cover exposes the three main chutes for deployment.

At 9000 feet of altitude a barometric switch operates to fire mortars that deploy three pilot chutes, which then pull out the three main chutes. These three chutes are each 25 yards across and slow the command module decent to a safe speed.

At 750 feet you once again close the cabin pressure relief valve to prevent sea water from entering the cabin. When the command module hits the ocean it may partially submerge or even land upside down. Your mission ends with a perfect splashdown is a smooth and nearly wave free sea.

What a great conclusion to an adventure that lasted over 12 days. Welcome home planet Earth!