“The power of the first stage Saturn 5 rocket happens to equal the peak electrical demand of the UK. ” 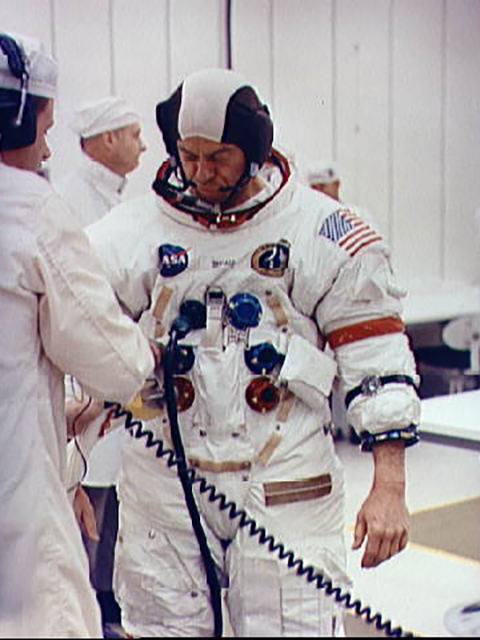 You awaken 4 hours and 15 minutes before launch and taken to see your flight surgeon. You are greeted by your favorite nurse, who proceeds to give ou a brief physical exam. Your flight surgeon follows up with a slightly more thorough look-over and gives you the ok to fly. You know you’re healthy, but this was NASA’s last chance to cancel your adventure. You breathe a sigh of relief.

You are taken to a breakfast area and fed steak and eggs, coffee and orange juice. This meal is considered traditional, but it is also low in residue. Your first day is real busy, not a lot of time for personal hygiene issues.

Next you are taken to a large open room where you will suit up. Several technicians are there to help you don your space suit.

They put you in your one piece constant wear garment. This garment is like long johns, but with biometric sensors built in for monitoring your heart and respiration. You’ll wear these for the better part of your 12 day mission. The gas-retaining pressure bladder is next, and then the outer structural beta-cloth restraint layer. A communication carrier (“Snoopy hat”) is placed on your head. This device has redundant microphones and earphones and is worn with the pressure helmet.

Your suit is pressure tested to be sure it is airtight. If you pass the pressure test you’re sealed in and given a hand held portable supply of pure oxygen.

You and your two crew members are escorted to a large van and driven to the launch pad, self-sealed in your own atmospheres.

Three hours before launch you arrive at the 320 foot level of the launch umbilical tower. This is the ninth and highest umbilical arm that leads to the “white room” where a crew of technicians will strap you and your two crew mates into the spacecraft couches in the Command Module (CM). This procedure is called Astronaut Insertion.

You are the commander so you will enter the command module first. You will sit in the left couch where you will have the best view of instruments that indicate your launch trajectory. As the commander, only you can manually abort the mission by twisting the translation control in your left hand. The instrumentation before you will also allow you to manually direct the launch vehicle into orbit, if necessary. At this moment, you literally have the fate of the mission in your hands.

Your crew mate the Lunar Module Pilot (LMP), enters next and takes the right seat, followed by the CMP (Command Module Pilot) taking the center seat. The pad team pulls your restraining straps tight, seals the cabin hatch and retreats to a safe distance from the vehicle.

Five minutes before launch the umbilical arm supporting the afore mentioned white room is swung away to the opposite side of the launch tower. You and your crew are busy following your checklist at this critical moment in your journey.

Twenty seconds before launch the internal navigation system, of the Saturn 5 rocket, confirms your known position on the Earth, and aligns the CM guidance platform.

8.9 seconds before launch, the first stage of the Saturn 5 rocket begins the ignition sequence for the five F-1 engines located at its base. All five engines attain full thrust one second before launch. At full thrust, the five F-1 engines will consume more than 13 tons per second of kerosene and Liquid Oxygen (LOX). This fuel consumption will continue for the entire 2 minutes and 39 seconds the first stage is in use. The output power of the first stage Saturn 5 rocket happens to equal the peak electrical demand of the United Kingdom for that amount of time.

One second before launch, the Saturn 5 computers decide the five F-1 engines are at full thrust. Four hold-down arms are released pneumatically, and your vehicle is free to fly. 10 seconds later your rocket clears the top of the launch tower. 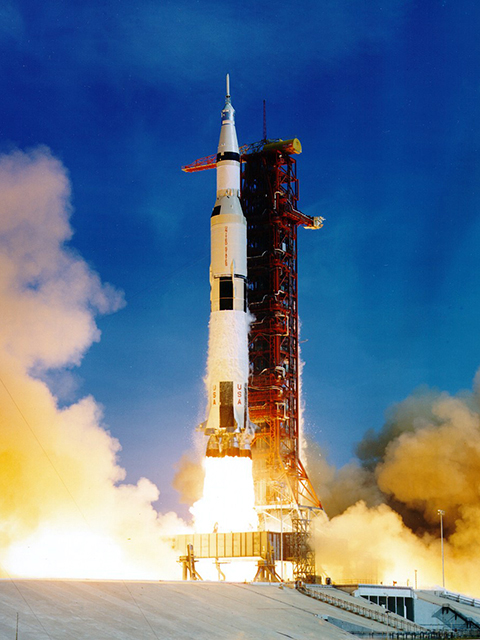 You are shaken by vibrations in almost every direction. Your fellow astronauts had described this ride as like riding an old freight train going down a bad track. You are aware of the abort handle in your left hand, so you relax your grip. You wouldn’t want to accidentally activate an abort because of this rough ride!

Soon after the Saturn 5 clears the launch tower, the four outboard engines of the first stage begin to gimbal and steer the entire rocket from a vertical position, to a very gradual horizontal position. This steering causes you to have another unusual sensation of motion. As your acceleration increases, the g-forces increase also.

You are 2 minutes and 30 seconds into the first stage burn, and you have accelerated to 4g’s. You have been pushed deeply into your couch and you know the first stage rocket has almost exhausted its fuel. You prepare for the first stage to shut down and staging to begin.

When your vehicle lifted off it weighed over 6,500,000 pounds. 2 minutes and 38 seconds later it weighs less than 1,900,000 pounds. You are at an altitude of 37 miles traveling at 5,300 miles per hour. Your acceleration is at 4g’s and then, BAM, staging occurs! Your vehicle is cut in half by an explosive cord. The second stage rocket starts its five engines one second later and you continue on your way to low earth orbit. The first stage rocket slowly falls toward the Atlantic Ocean below. Bye bye, first stage rocket.

At staging the vehicle goes from 4g’s to zero g’s instantly. The entire compressed stack of the remaining rocket unloads its entire length, and stretches out in the opposite direction all at once. You, being at the end of this stack, feel like you are going through the instrument panel! Then, one second later, the five engines of the second stage fire, forcing you back into your couch for more acceleration. You are holding the abort handle at its base, praying you don’t do the wrong thing.

The second stage has five J-2 engines configured similarly to the five F-1 engines of the first stage. The J-2 rocket engine combusts Liquid Oxygen (LOX) and Liquid Hydrogen(LH2). The reaction of hydrogen and oxygen is a powerful source of rocket thrust. The exhaust from this reaction is superheated steam.

After such a violent staging event, your realize things have really smoothed out. You accelerate for the next 6 ½ minutes to just over 2g’s. Then the second staging event occurs. This time you feel a jolt forward, but not nearly as severe. Bye bye, second stage rocket. 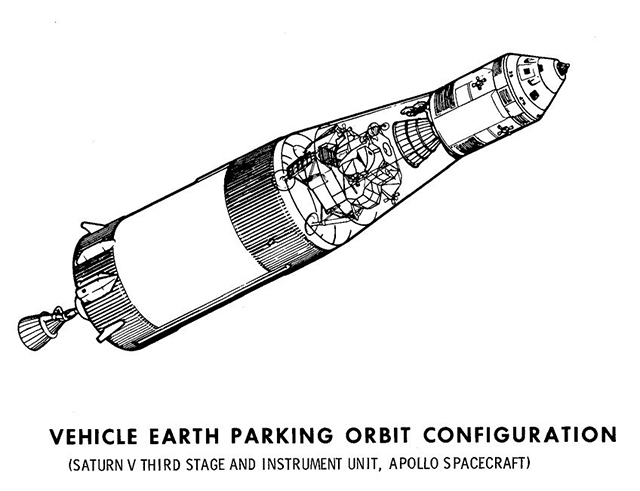 Your vehicle now weighs only 380,000 pounds. You are at an altitude of 94 miles and traveling at 14,637 miles per hour. The third stage rocket consists of a single J-2 engine that will complete your insertion into low earth orbit. This rocket engine is almost identical to the J-2 engines on the second stage, with the exception it can be restarted.

Two minutes and twenty five seconds after starting the third stage, you are finally at the velocity for low earth orbit. The third stage rocket engine shuts down. Your vehicle now weighs only 310,000 pounds. You are at an altitude of 94 miles and traveling at 16,557 miles per hour. You congratulate your fellow astronauts. You are thankful for all the hard working men and women that made this engineering marvel possible. You have gone from zero miles per hour to over 16,000 miles per hour in twelve minutes!

You are now in a micro gravity environment. You have plenty to do. The command module and its service module need to be completely checked out in the next two hours. If everything checks out OK, the third stage rocket will restart and burn for 6 minutes. This thrust will accelerate the vehicle to a speed of 25,000 miles per hour, which is the velocity your vehicle needs to go to the moon.

You are now two hours an fifty six minutes into you mission. Mission Control has informed you your vehicle is healthy and you're go for Trans Lunar Injection (TLI).. You restart the third stage J-2 rocket motor. Six minutes later the engine shuts down. 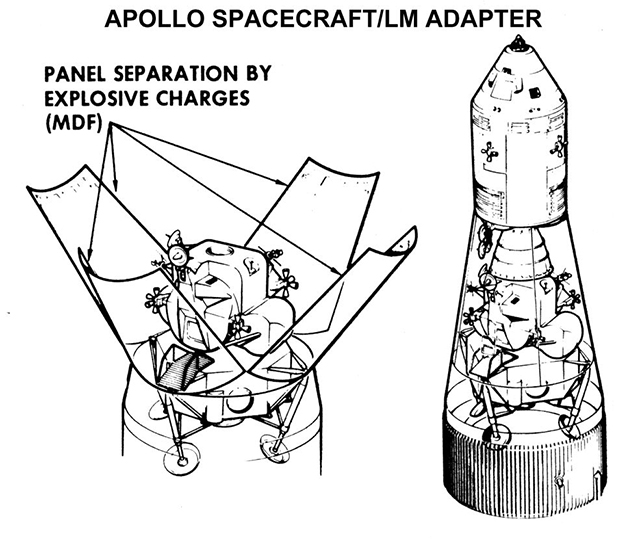 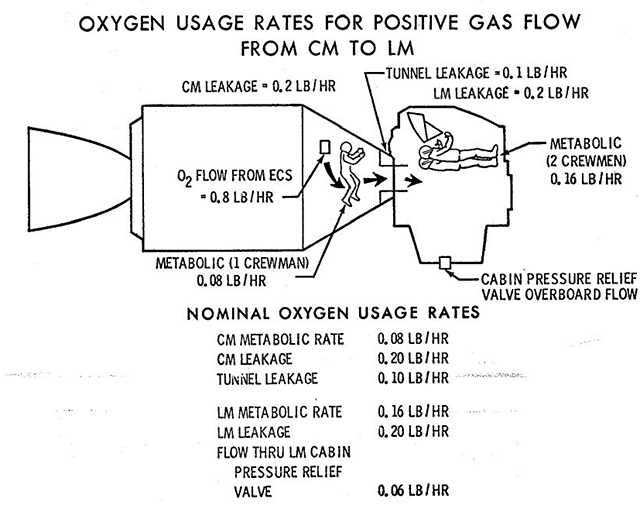 You are now four hours and thirty nine minutes into your adventure. For the next three days you will fall all the way to the moon through the vacuum of space. What an adventure. Of course the real adventure will be landing on the moon!

Next: Landing on the moon